The proofs for my next book arrived in the post today. It’s always a nerve-racking (or should that be nerve-wracking?) time. It’s the last read-through before the book goes into print, the last chance to catch any little typos, anachronisms, formatting snafus, or even major plot holes. Thankfully, it’s also being read by a professional proofreader. So what I don’t spot, I’m sure they will. 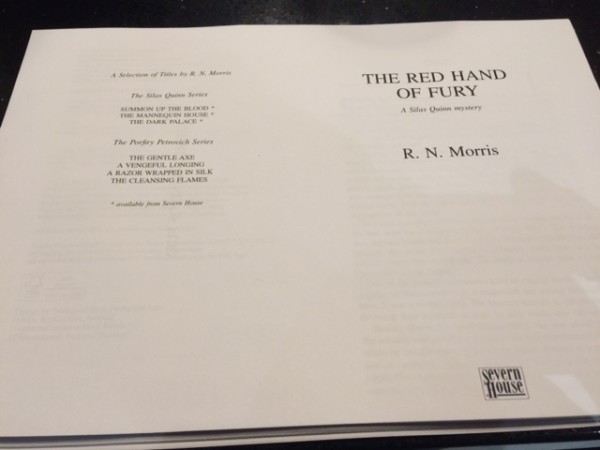 Inevitably, you’re under pressure from the publisher to get the job done as quickly as possible. I’ve basically got until Monday to let them know if I want anything changing. That’s my weekend sorted then. The timing is always tight – there’s a slot the book has to make if it’s going to meet its allocated publication date (31st March, thank you for asking).

It’s bad enough for a book that is part of a planned production schedule. How much more pressure must there be when the publishers decide to bring forward the publication date, say to beat a threatened ban or to cash in on a wave of sudden interest?

So, yes, I get why there are so many errors in that other book with Fury in the title, despite allegedly having two fact-checkers on the project.

Michael Wolff is doing a pretty good job of brazening out the criticisms over factual inaccuracies. I think it must be annoying for him though. It’s just a stick for the Trumplodytes to beat him with. If he gets the small shit wrong, like mixing up two people with the same name, how can he be believed on the big picture?

For the historical novelist, the fear is that someone’s going to pick you up on some arcane historical detail, for instance that the cigarette cards you refer to weren’t produced until a year later, or that day you say the weather was fine, records show it was actually raining, or something…

I hate to get any detail wrong, and saying ‘it’s just a story’ isn’t really an excuse. The way a story works is that you build a world that the reader believes in – anything, however tiny, however trivial, that takes even one reader out of that world blows the whole thing apart. Well, that’s how it feels anyhow.

But it’s interesting how Wolff’s story, his overarching narrative, seems to survive the inaccuracies. Somehow we do believe in the accuracy of the big picture because it just, well, feels true. Or maybe it’s because we want it to be true? We’re willing it to be true. Maybe that’s how all stories work. They have to conform with our wishes on some level for us to believe in them.

One thing’s for sure, all the mistakes – and even the apparently ugly cover design – don’t seem to have done Fire and Fury’s sales any harm.