I’ve just finished checking the proofs for The Red Hand of Fury. The book comes out in hardback at the end of March. 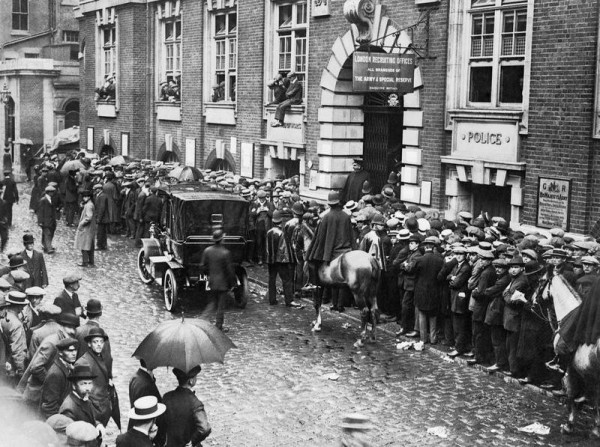 It’s the fourth book in my Silas Quinn series and takes the story up to the outbreak of the First World War. That event happens while my hero… no, I’ll stop myself there as I don’t want to give away any spoilers. Let’s just say that Silas is rather preoccupied and the outbreak of the war seems to pass him by.

I’m already working on book five in the series. I haven’t started the actual writing yet, but I have been doing a lot of research. (Just in case my editor reads this – I am getting on with it, honest.)

That book, the one after The Red Hand of Fury, will be set in London during the early months of the war.

At the moment, I’m reading Kitchener’s Army: The Raising of the New Armies 1914-16 by Peter Simkins. The photograph above appears in it. It shows crowds of men queuing in the rain to enlist at the recruitment station in Great Scotland Yard (the original address of the Metropolitan Police HQ).

Knowing what we know now, about the casualties and the awful conditions at the front, it’s hard to get our heads round the rush to war that the picture seems to imply. However, Simkins suggests the mood was more muted than exuberant, quoting The Times: ‘There was no cheering and little excitement, but there was an undercurrent of enthusiasm…’

Looking at the men leaning out of the windows and sitting on the windowsills, we can almost feel the enthusiasm.

The photo was taken just at the outbreak of war, in early August 1914. The men in the picture were driven perhaps by old-fashioned ideas, such as duty and patriotism. Even by a love of the Empire. Most of them had no real idea what they were about to sign up for. Many people in the country believed it would all be over by Christmas. Interestingly, though, not Kitchener, who did his best to prepare the public for a war that he believed would last at least three years. And which would need a constant supply of manpower – or cannon fodder, to use a brutal term.

It’s hard too, when looking at the photo, not to speculate on what became of the men we see there. Some will die in combat. Just over ten percent of them, if they correspond to the figures for the nation. Some will die from disease. Some will lose limbs, or be blinded, or have their lungs ravaged by poisonous gas. Some will be taken prisoner and see out the war in POW camps. Some will desert. Some will be imprisoned. Some will be shell-shocked, or suffer from what we now call post-traumatic stress disorder. Some will be scarred psychologically in other ways. Perhaps they will suffer from depression, their marriages will break down or they will come back to unemployment and poverty. Some will survive relatively unscathed.

But all of them will be changed in some way or another by the war. If you could gather them together in five years’ time – the whole, the lame, the disfigured, the dead, and even the scattered body parts – you would see a crowd of different men.