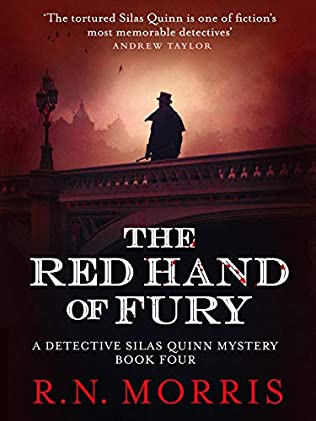 The Red Hand of Fury

London, June 1914. A young man is mauled to death at London Zoo after deliberately climbing into the bear pit. Shortly afterwards, another young man leaps to his death from the notorious Suicide Bridge. Two seemingly unconnected deaths – and yet there are similarities.

Following a third attempted suicide, Detective Inspector Silas Quinn knows he must uncover the link between the three men if he is to discover what caused them to take their own lives. The one tangible piece of evidence is a card found in each of the victims’ possession, depicting a crudely-drawn red hand. What does it signify? To find the answers, Quinn must revisit his own dark past. But can he keep his sanity in the process …?

“The tortured Silas Quinn is one of the most memorable detectives in fiction.  Historical crime fiction doesn’t get much darker than this.”

“Silas Quinn is a superb, complicated and brilliantly-realised detective and The Red Hand of Fury is a wonderful addition to a gripping series. Don’t hesitate!”

“taut and twisty, with a psychological intensity that’s rare and compelling”

“Bleak, original, and absolutely gripping, this historical thriller makes for an unsettling and compelling read.”

“fans of traditional puzzle mysteries will be rewarded.”

“I didn’t so much read this book as grind my teeth while experiencing it… a rattling good read.”

“Morris shows how adept he is at filling in the fascinating detail of the period.”

“I love this series so much I emailed the author and asked him to write a new one .”

“The author’s skills remain as acute as when he was writing his atmospheric period mysteries featuring Dostoyevsky’s detective.”

“a delight to read, darkly humorous, and fascinating in its period detail.”

“This was one nail-biting story. The pace was excellent… the characters were well done and complex.”

“The mystery of the book is excellent, constantly leaving you guessing and providing loads of twists that even the most avid reader of crime fiction would struggle to spot and the final act is dramatic and satisfying to read.”

It Takes A Woman blog

“I absolutely loved this book and can’t believe it has taken me so long to find this author!”

“… a very compelling and absorbing read.”

Writing From The Heart blog

“the macabre feel of a Poe at his darkest… a well-written riveting piece of fiction.”

“…incredibly compelling, keeping me enthralled until the final page.”

“If you like well plotted, unusual historical thrillers then you’ll love this book.”

Over The Rainbow Book Blog

“I felt as though I read it like I was watching Silence of the Lambs, with one hand over one eye.”

“I totally recommend this book and I will be reading the previous ones in the near future.”

“This is one I would definitely recommend.”

Me and My Books

“This is a great, dark mystery.”