RM: Maria, you’ve written on your own blog about the increasing numbers of authors ‘dipping a toe in the self-publishing waters’. What are your own reasons for going down this route?

MG: For the last twelve months or so, seems to me that I’m hearing more about self-publishing than traditional. Maybe it’s just an obsession with the new, or a kind of opportunism, that’s gripping authors right now. Maybe in a couple of years everything will return to normal.

I tend to trust my instincts about business: I started working in biotech when the UK had just one ‘proper’ biotech company – and then watched the sector boom. I left bioscience in 1996, to set up an IT business because I sensed that the Internet sector was about to take off. Mind you – both sectors went through bubble periods too…

That’s how I feel about self-publishing right now. I can’t explain it any better – it’s a gut reaction to what I’m picking up. And – when this happens – I have to get involved!

The Descendant, I think I’m right in saying, is an adult book. Are you trying to reach an entirely new readership with this? Is this the kind of risk-taking that e-publishing through Kindle makes possible?

It’s principally about reaching a new readership, yes. The Joshua Files have been enjoyed by a lot of adults as well as teens. Adult readers can be helpful to kidlit authors too – they can recommend authors to their own children. However, most of the Joshua Files fans are 13+ and many have expressed an interest. The Descendant is like a Joshua Files book with more hard science, and adult (mid-twenties) protagonists, but there’s nothing an older teen couldn’t read. It’s this factor – teenage readers – that has persuaded me to also make The Descendant available as print-on-demand. E-publishing is relatively easy by comparison! For new authors looking for a brand new audience, I think digital-only is the way to go at first, without the extra stress and overhead of print.

Why did you set up an imprint and what was involved in doing that? Is it necessary? How much work and outlay (if you don’t mind revealing that!) has it taken to get The Descendant out there?

My husband and I already had a limited company, with publishing activities in its remit. So that was a step we could skip. It’s mainly administration. The most tedious parts for us were getting the ITIN so that you can earn royalties in the US without having tax removed, applying for ISBNs with Neilsen, and signing all the contracts with Lightning Source.

Seriously, I left it to the last minute, because of a bizarre aversion to dealing with legal stuff, or even paper and envelopes. Formatting a ms with Microsoft Word is no joke either. But InDesign is expensive, and Createspace charge $179 to format a manuscript for print and $79 for Kindle. Well, you save money where you can.

I’ve learned so much about using Word now. All that knowledge is an investment. So the answer is – it’s a lot of work. But now, I can typeset and format a ms for print and ebook in half a day. 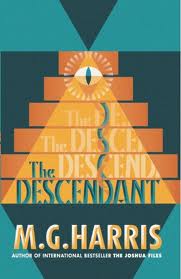 Excellent cover, by the way. Who designed it and how important is the cover for you?

I’m glad you like it! It’s the work of Gareth Stranks, a designer I met about twelve years ago when he was in sixth-form. He won a competition to design an emblem for the new Catholic secondary school in Oxford, St Gregory. Even then he had an original eye and a terrific grasp of colour. After graduating as a graphic designer he set up his own agency.

I really enjoyed working with Gareth, and hopefully he’ll get a chance to design more book art, because he’s got some amazing ideas. As to the importance of jacket art – it’s huge for a book that might be picked up in a bricks-and-mortar store. Online though – the image needs to impress at a glance – with a small graphic at that. No texture, no foil effects will be seen. Everything relies on colour, art, typography.

I love the trailer too. Very gripping and professional. Who produced that for you? Why did you think it was important to produce a trailer and what do you think it will achieve for the book?

Thanks Roger. I produced the trailer myself, as I have done for all the Joshua Files trailers. This one used three bits of stock footage from istockphoto which cost about $100 in total, with a brief animation I made of the cover art, and some music which I downloaded from the composer’s website – it was a free-or-pay-what-you-can site. I gave him $15. That’s a pretty reasonable price tag for something I’m going to use on several websites and in my author events.

The jury seems to be out about book trailers but I enjoy making them and its all part of giving my books a visual, cinematic dimension. In general I love watching book trailers and wish adult litfic books used them more. I’ll admit, I watched the 1Q84 trailer about twenty times…I was so desperate for that book.

I get the impression that you have always been fairly active in terms of promoting your books. Have you had to step up the self-promotion even more, or is it just a question of carrying on doing the same as you’ve always done?

With Joshua Files I worked closely with Scholastic, who supported all the ideas I had for online promotion. Events, some print publicity, television and bookstore promotions, however, were all organised by Scholastic. A self-publisher can organise many events, local radio and print, but national TV – that’s hard to achieve without a professional publicist. And bookstore promotions are strictly for the big boys and girls. I have a plan, which is taking time, effort, and a budget. We’ll see how far that goes. And because this is an experiment, I’m measuring everything.

Your previous books are published by Scholastic. What are the benefits of being with a big publisher that you’ll miss going it alone? Are there any?

The advance, to some extent, but most importantly, the money for national advertising and bookstore promotions. You could get the funds from an investor or the bank, sure, but publisher money comes with contacts, distribution, sales reps and expertise. The professional relationships, of course, are wonderful, but you can still enjoy those with the freelance professionals you engage as a self-publisher.

Conversely, what are the advantages of being your own publisher?

It’s a creative as well as an entrepreneurial activity – a multi-layered project that engaged a wide skill-set. It’s not for everyone, there are authors who only want to write and that’s totally understandable. My inner business-woman became tired of standing on the sidelines, I guess. But now, maybe author-MG needs to stand up to that bully (publisher-MG) and insist on more quality writing time and inspiration time. Scholastic were always very sweet to me. The truth is, I’m a far meaner business partner.

Is this the way forward? For MG Harris? For all authors? Where do readers stand in the explosion of self-published books?

Here’s the thing – I have two completed manuscripts, right now. Even if a publisher acquired one tomorrow, it wouldn’t see print for 18 months. I see this as a problem. I could write and publish two novels in that time. If it turned out I can make more money faster by publishing my own work, that’s a big temptation. I could email my database of readers and poll them about what I should write next, write it from scratch and make it available in the same year. Is this a way I want to operate? It’s too early to say. If you go into an experiment with a bias towards one outcome, it often influences the result. Authors who want to self-publish need to remember that it’s a business. You’re going into business for yourself.

If that isn’t what you want then you need to use it as a way to circumvent the slush-pile, like EL James. That is analagous to being an early stage drug discovery company who plans to sell their leads to Big Pharma after phase 2 clinical trials. It’s one business model – lower risk, lower reward. That biotech company I worked for in 1987 – they had grander vision. They wanted to take their compounds all the way to market. By the early 90s they were listed in the FTSE 100. Then – the bust. Hubris! Now their ex-employees work for all the new little biotechs in the UK.

Business is unpredictable, exciting, addictive. If I had EL James’s success, maybe I wouldn’t take the trad deal – I’d hire staff. But then, I’ve probably had all the wrong business influences.

2 thoughts on “Adventures in e-publishing Part 15 – interview with MG Harris.”