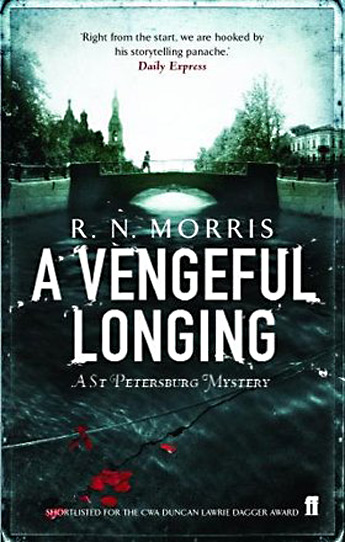 So yesterday, I noticed that The Cleansing Flames ebook had been reduced to £1.65. Today the same thing has happened to A Vengeful Longing, my 2008 CWA Gold-Dagger-nominated novel. (Actually the Gold Dagger was called the Duncan Lawrie Dagger that year, because of a deal the CWA did with the devil, I mean the sponsor. But I’m sure Frances Fyfield, who won it, will tell you it’s the same thing.)

This is the book of which Publishers Weekly, in a starred review, said: “Morris captures this world with expert strokes… this novel stands out from a number of fine czarist-era mysteries-by Russians and foreigners alike-like a Fabergé egg at a yard sale.”

The CWA judges described it as “A brilliant reinvention of Dostoevsky’s Crime and Punishment…” noting the “very sympathetic Russian-set investigator and a vivid, pungently-evoked sense of 19th century St Petersburg.”

New York Magazine, in choosing it as the runner-up in their thriller of the year award, said “reads like an episode of Columbo, but with feverish Russian psychology and the filthy overflowing canals of 1868 St. Petersburg.”

2 thoughts on “Welcome to the yard sale.”