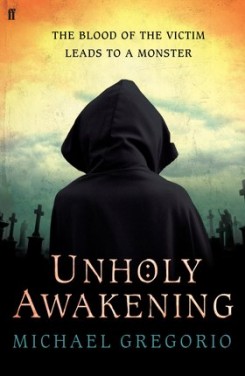 I recently had the great pleasure of interviewing my lovely friends Mike Jacob and Daniela de Gregorio, who write together as Michael Gregorio. The interview has now appeared on The Rap Sheet, to coincide with the release of their latest book, Unholy Awakening – a book which I thoroughly recommend, by the way. Set in Prussia in the Napoleonic era, it a wonderfully gothic tale, dipped in blood. Here’s the blurb:

“A female corpse is found in the town of Lotingen. The girl’s neck has been ripped open, all the blood drained from the body. Hanno Stiffeniis hastens to investigate a case more terrifying than murder. Would any human being kill in such a gruesome fashion? Emma Rimmele has come to Lotingen to bury her mother. A beautiful woman travelling with a coffin in her baggage, Emma attracts gossip like a magnet. When a corpse is discovered near the house where she is living, speculation about the mysterious stranger reaches fever pitch. When two more ravaged bodies are found, fingers point accusingly in her direction. One word is heard on every tongue. Vampire . . . News arrives from a nearby town. A French officer’s throat has been ripped out. Another French soldier has bled to death. The horror of Lotingen is happening elsewhere. Colonel Lavedrine, a criminologist in the Grand Armée, is ordered to collaborate with Magistrate Hanno Stiffeniis. Two years earlier, they had worked together to solve a murder despite fierce clashes of character and opinion. Once again, each man is drawn into the forbidden world of dark graveyard paths and reading in pursuit of a curse which has plagued Prussia for centuries.”