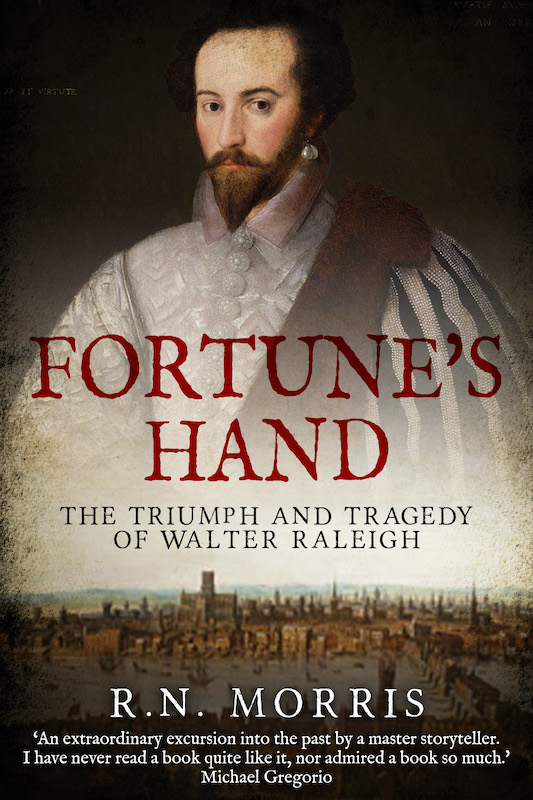 I’m really excited to announce the publication of a new novel, Fortune’s Hand. It will be available as ebook first of all, with a paperback on the way soon for those of you who like to hold a physical book in your hands.

“An extraordinary excursion into the past by a master storyteller. I have never read a book quite like it, nor admired a book so much.” Michael Gregorio

Drawn by ambition to Elizabeth’s court, Walter Raleigh soon becomes the queen’s favourite. But his meteoric rise attracts the enmity of some powerful rivals.

Sir Francis Walsingham, the queen’s spy master, proves a dangerous enemy. While the earl of Oxford is an equally dangerous friend. Even Elizabeth’s favour is an uncertain gift. It can be withdrawn on a whim as easily as it is granted and earns him as much trouble as it does profit.

Seeking gold for his queen and glory for himself, Raleigh launches a series of ever more reckless adventures.

The ultimate prize he dreams of is the fabled city of Eldorado in the New World. It is a dream that obsesses him to the end of his life.

After Elizabeth’s death, Raleigh fails to find favour with the new king and is imprisoned in the Tower.

To restore his reputation, he embarks on his most desperate adventure yet.

By now an old and broken man, he risks everything to find the city of his dreams and bring home its treasure.

I’m going to be writing a blog post soon about the research that went into the book.

In the meantime, many thanks to everyone at Sharpe Books for making this happen so quickly!