I know, I know… It’s been a long time. My excuse is I’ve been busy writing a book, the third Silas Quinn novel, which is now submitted to my editor. Which means I can draw breath and pay some attention to my long-neglected blog.

I’ve decided to break blog-silence by posting an illustration that my mate Dave Money has done for one of my Twisteries. You remember them? I think Dave’s illustration is brilliant – so I’ve decided to republish the Twistery in question to celebrate. 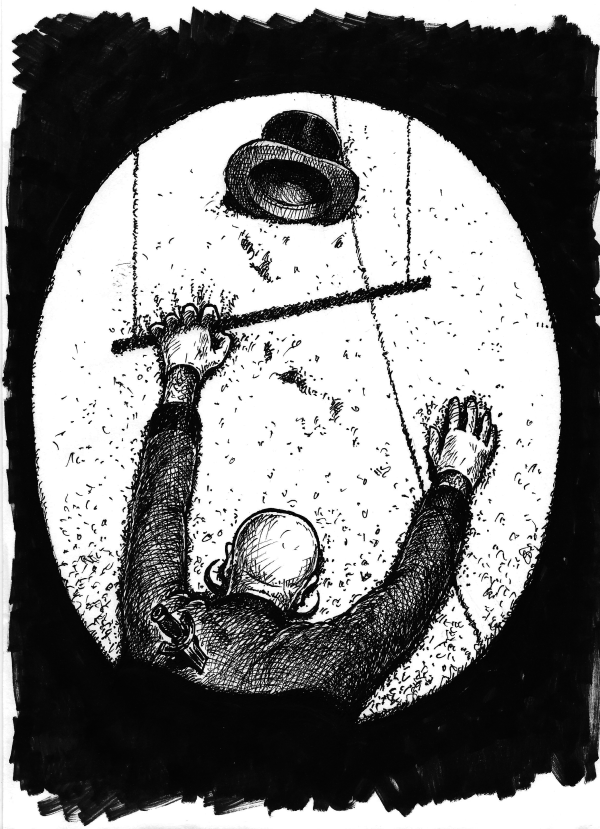 There was sawdust around the body. The only footprints belonged to the dead man. Who stabbed him and how did they get away?

Fresh sawdust was spread every morning in preparation for the matinee show. The workmen started from the centre, walking backwards as they raked, so as not to leave footprints. They worked quickly and left the big top immediately to get on with their other duties.

The first man onto the virgin sawdust was always Billy Fabulous, the ringmaster. And so it was the morning of his death. There were no marks in the sawdust, except for the victim’s own footprints, and some vague impressions formed where his top hat had fallen and rolled away from the body.

According to Susan Fabulous, the dead man’s wife, the ringmaster had no enemies and was a popular figure in the circus troupe which his great grandfather had founded. She dabbed tears from her eyes as she sobbed, “Everyone loved Billy.”

She could have been lying. But DCI Stafford found himself so fascinated by her beard that he failed to notice the usual signs of deceit. In fact, he barely took in a word she said.

The knife in Billy Fabulous’s back had a long sparkling handle, as if it were encrusted with tiny fragments of a broken mirror.

“Not a very practical kind of knife,” observed Ringer. “The handle seems designed for show.”

“Or showbiz,” said Stafford. “I think we’d better talk to the knife thrower.”

They had to drag Carlos Bastardo from his bunk. A stooped wreck stood before them, stinking of the previous night’s bender. His eyes were stuck together with sleep. When he finally managed to prise them apart, he blinked at the grimy light coming through his caravan window as if he was staring directly into the sun.

Stafford had him hold out his hands. It was the worst case of delirium tremens he had ever seen. “You’re the knife thrower?”

The circus had not one but two trapeze artists, the husband and wife team known as the Flying Foxes. Arno Fox was a muscled brute with chiselled features. Priscilla Fox was perhaps the most beautiful woman DS Ringer had ever seen. Lithe and lissom, her every movement provoked a gasp of amazement. To see her shake the auburn hair out of her eyes set the heart thrumming like a high wire. What it must have been like to watch her perform on the flying trapeze was beyond Ringer’s ability to imagine.

Ringer was outraged. “You don’t seriously think this exquisite creature could be capable of murder?”

“She’s not the murderer, she’s the motive,” said Stafford. “The ringmaster and she were having an affair. Her husband killed his rival out of jealousy – without setting foot on the circus ring, naturally.” The detective glanced sympathetically towards Susan Fabulous. “The real mystery is why he went chasing after that vixen when he had Mrs Fabulous at home.” Stafford gave a world weary sigh. “There’s no accounting for taste.”