This is a follow-up post to Fake news is nothing new (Part 1), where I began to tell the story of Kate Hume, a young office worker from Dumfries who in September 1914 forged two letters, purportedly evidence that her sister Grace, a nurse, had died horribly at the hands of the Germans in Belgium. Her sister turned out to be alive and well and living in Huddersfield. 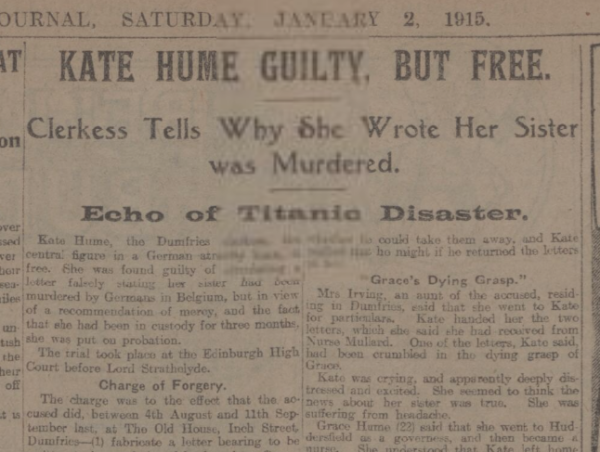 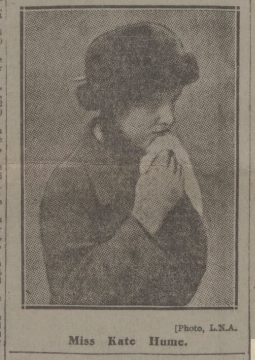 Kate, who was just 17 at the time, was arrested and put on trial. She admitted writing the letters, which were in her normal handwriting. There was no attempt to forge her sister’s handwriting, or disguise her own. And they were written on paper from the office where she worked. The letters were published in the Dumfries Standard, though Kate did not take the letters to the newspaper herself. Word of the ‘murdered’ nurse had got round and a reporter had come to the house where she lodged asking to see the letters. Kate was ill in bed at the time but her landlady’s daughter asked if she could show the reporter the letters. Kate didn’t object and allowed them to be taken away for publication.

It all seems very passive, as if she felt she had no power to stop what she had set in motion. The story had taken on a life of its own, and she seems to have surrendered to it. The fact that she had taken to her bed, most likely suffering from depression, which she had a history of, suggests not a wicked hoaxer determined to cause panic and alarm, but someone  lost, confused, hurting and emotionally unbalanced. The whole thing reads like a classic cry for help.

Kate’s father, Andrew Hume, was a music teacher. We learn from the newspaper reports that he had remarried in 1905 after the death of his first wife. By my reckoning, Kate would have been about seven or eight when her mother died. This tragedy was compounded when her beloved brother John went down with the Titanic in 1912. He was first violin in the band. You know, the band that famously played Nearer, My God, to Thee as the boat sank. That band.

Wow. What an effect that must have had on the young Kate! By all accounts she was very close to John – or Jock as he was known. When his name was mentioned in court, she buried her face in her handkerchief and wept.

‘Kate and John were bound up in each other, and she had never been the same girl since,’ the account ran. That was when her depression started. She also suffered from headaches and insomnia.

But even if they hadn’t been close, it was still an appalling event for a young girl to deal with. Drowning is a horrible way to die. She was evidently a sensitive and creative person. Her imagination must have pictured the scene to her many times as she struggled to process it. That’s one of the curses of having a fertile imagination. We often imagine disasters that haven’t happened yet. But when we have a disaster that already has to work with, it’s almost too much.

Kate was a talented musician as well, which may have explained her closeness to her big brother. Even so, her father had arranged for her to take an office job, snuffing out any musical ambitions she might have had. So, as well as the deaths of her mother and brother, she had also to contend with the death of her dreams.

Then there’s the relationship with her stepmother. The newspaper accounts don’t give much away, probably because the main testimony concerning this comes from Kate’s father, who was the first witness called. He acknowledged differences between Kate and her stepmother, but described them as ‘small’ and ‘nothing serious’. ‘Kate was a good girl, but she desired more freedom and rather resented control’. We can only speculate what form that control might have taken, but there’s a possibility that Andrew Hume was underplaying the differences out of loyalty to his wife. He certainly wouldn’t want to give the impression that she was responsible for Kate’s actions, or that she had pushed a highly-strung girl too hard.

At any rate, Kate was so unhappy at home that she moved out. You might have thought that if she had any issues with her stepmother, being separated from her would have settled them. But depression isn’t as easily cured as that. The feeling that she wasn’t welcome in her own family home must have been incredibly alienating.

Kate herself said she didn’t know why she wrote the letters. In her defence, she cited her brother’s death, her depression and headaches, and the fact that she was unhappy at home. She claimed that she had heard that Grace, the sister she claimed had been mutilated and killed by Germans, was going to the front. (There is no evidence that this was the case, incidentally.) As the Dundee People’s Journal of 2 January 1915 reports: ‘[A]nd in the absence of word from Grace she concluded that she was at the front. [Kate] had read and been told of German atrocities in regard to women. She began to think of the Germans and what they were doing. It got on her nerves… She had got it into her head that Grace was killed. She had no intention of creating a sensation, or to harm her father or stepmother. She fancied that that would be the way her sister would write to her in her last moments.’

I think Kate was a catastrophist. She had imagined the worst possible thing that could happen and had imagined it so deeply and vividly that she had convinced herself that it was true. And so she wrote the letters, perhaps half in a trance, to provide substance for this fantasy. Possibly, originally, the letters were intended to be private documents. Or possibly she had always intended to share them with other people, so that they would become as convinced as she was.

In the forged letter from the fictional Nurse Mullard, Grace’s supposed friend, was the sentence ‘She would be going to meet her Jock.’ An explicit link with her brother who died on the Titanic, which is reinforced by the fact that Kate seems to have come up with the name Mullard because she was thinking of another boy from Dumfries who went down with the Titanic, called Mullins. Somehow, the terrible and extreme fate that her brother had suffered had changed Kate’s reality, which now had to be modified to a reality where beloved brothers drowned at sea. And if that was the reality now, then it was one step from that to a reality where sisters were mutilated and killed by German soldiers.

I’m a bit of a catastrophist myself. I have often imagined the worst that can possibly happen, and worked myself up into quite a state over it. For me, it’s a way of fending off the disaster that I fear most. If I think of it happening, it won’t happen. It’s a deal I make with whatever powers control our fates. (I even wrote a novel about it.) I don’t know if that’s what Kate was seeking to do. But I do know that these catastrophic fantasies can be very overwhelming and upsetting. And they can feel disturbingly real. More than once I have reduced myself to tears.